Cycle training over winter is tricky, especially when you live in a country in perpetual darkness from November to March, with weather not especially suited to donning lycra and heading to the hills. But cycle we must, and the answer of course is indoor cycling. There are many ways to address this and of course lots of opportunity to spend more money in so doing.

The easiest thing would be to hop on an exercise bike, either at home or at the gym. I used to sit on an exercise bike every so often at the gym, watching the TV, pedalling steadily and frankly barely breaking a sweat because of course a gentle pedal isn’t much use at all. A couple of years ago I started going to our club spin sessions which run weekly through the winter months and my goodness me what a shock I got. Suffice to say that the longstanding introduction to the sessions of ‘open to anyone of all levels – no one gets lost, left behind or falls off’ had to be re-written after my first session (I fell off). I am now a spin convert. A couple of years ago I completed the Etape Caledonia (a hilly 81 mile cycle sportive in Perthshire) then repeated it the following year after weekly winter spin sessions (and not much other cycling other than during races) and took 45 minutes off my time.

However, weekly spin sessions are no longer adequate if I am to prime myself for the cycling that will be required for my later training and indeed the Ironman itself so something else is required. And so we’ve invested in a smart turbo trainer. We bought a second hand Tacx Flux from a friend in the club as new ones can cost anything up to £1200. I say we. Really it’s just me that uses it. Paul cycles virtually every day to work and so packs the miles in. Jamie claimed that he would be a regular user of said smart trainer if we invested in one but this hasn’t quite materialised although he does hop on intermittently. And what is a smart turbo trainer I hear you ask?

Well firstly, there are regular, non-smart (let’s not call them stupid) turbo trainers which are machines which you can attach your normal bike to, and essentially turn them into indoor exercise bikes. The back wheel is essentially clamped onto a roller and you can cycle at will. There is usually some sort of mechanism that will control the resistance so you can recreate going up and down hills, for example. These turbo trainers tend to be a bit noisy and it’s difficult to gauge how much work you have done during your workout.

A smart trainer will connect to other apps and allow specific programs to set your workout and then give constant feedback during the session. It also controls the resistance automatically according to the set program, so for example if you are going up a hill, the resistance will get much stronger, as if by magic, without you needing to adjust any gears. For these you need to take off the back wheel of your bike and attach the frame (and chain) to the turbo, thus: 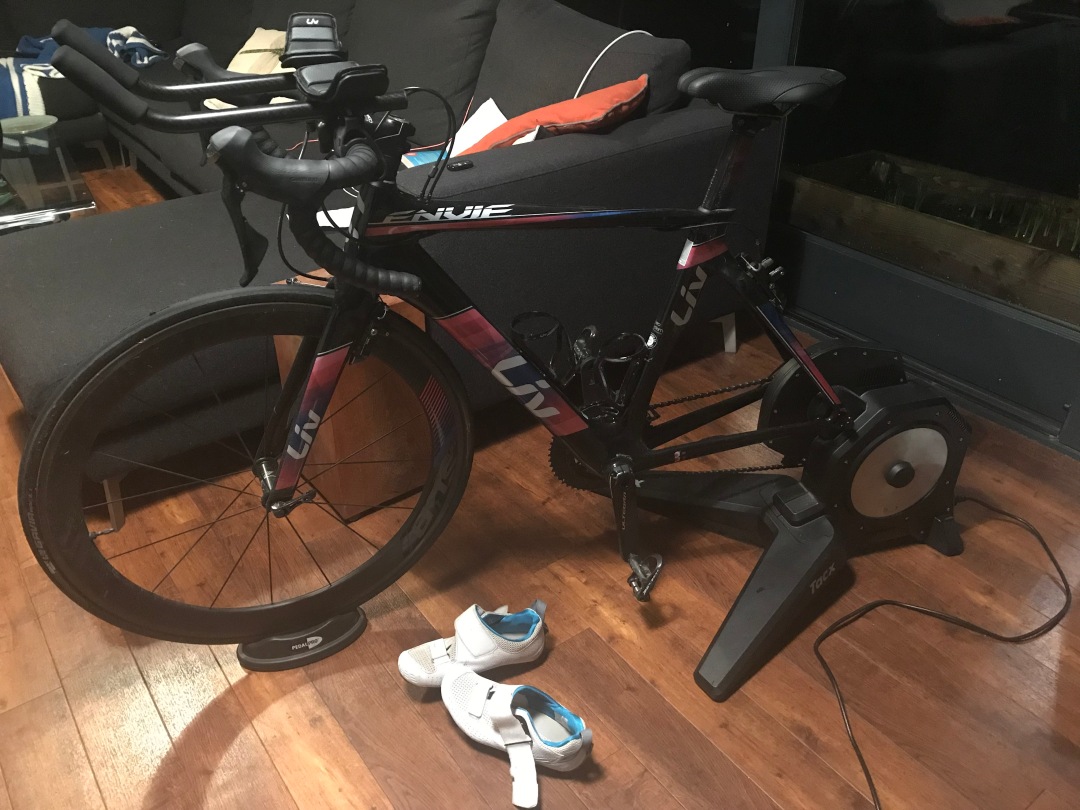 There is a bit of faff involved in connecting it to whichever app you choose to use for your workouts (see apps) and, as is the case with all training it seems, for most accurate analysis of your workout it is best if you record heart rate data at the same time. I use a program called Sufferfest, which is downloaded on my iPhone, and links, by bluetooth, to the Tacx Flux. However, my Garmin heart rate monitor, it seems, won’t connect to my iPhone at the same time (usually the HR monitor connects to my Garmin watch, but these cycle workouts are being recorded by the Sufferfest app, not my Garmin, so I can’t use the watch at the same time). After much research, and of course further expense, I purchased one of these little gadgets: 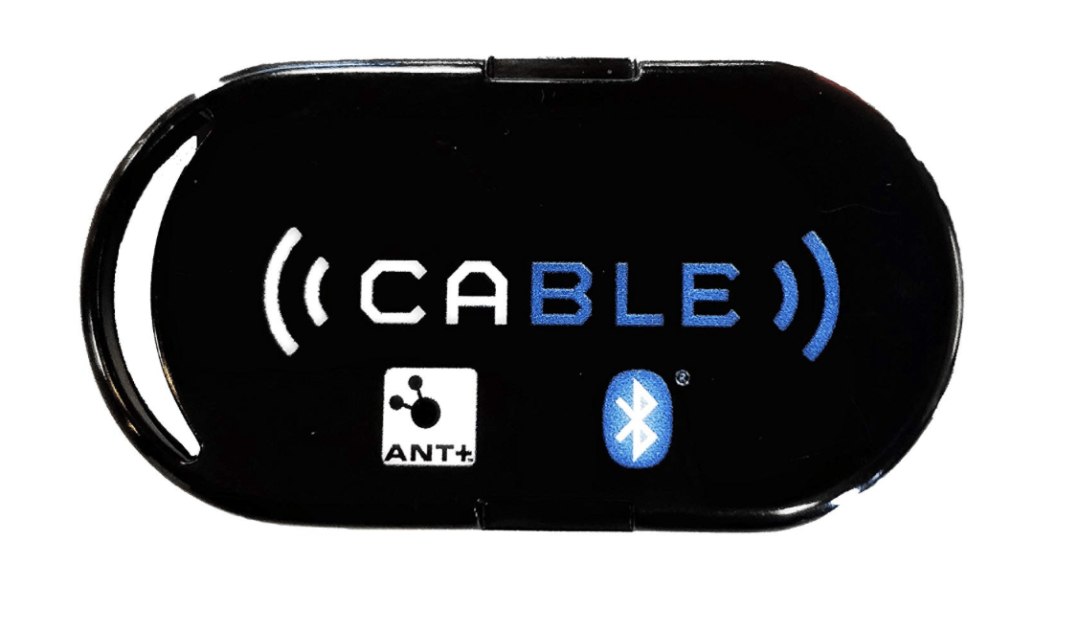 It is about two inches long and somehow connects my heart rate monitor to my iPhone. It cost an arm and a leg and needed to be sent over from America – so I got a note from the Post Office when it arrived saying they were holding it hostage until I paid the £15 customs fee. Hmph. But it does now at least mean I can do my workouts, record my heart rate and analyse everything afterward. Hoorah.

And the final thing to complete your indoor cycle training experience, is if you have an Apple TV box (my apologies – this blog is not sponsored by Apple) (or anyone for that matter) then you can magically send the Sufferfest program that is running on your iPhone, to a big screen. Although you might want to turn the volume down as the music is terrible. Here is me on my smart turbo, and Jamie on his regular turbo (using his gears) doing a Sufferfest session in the Christmas holidays. 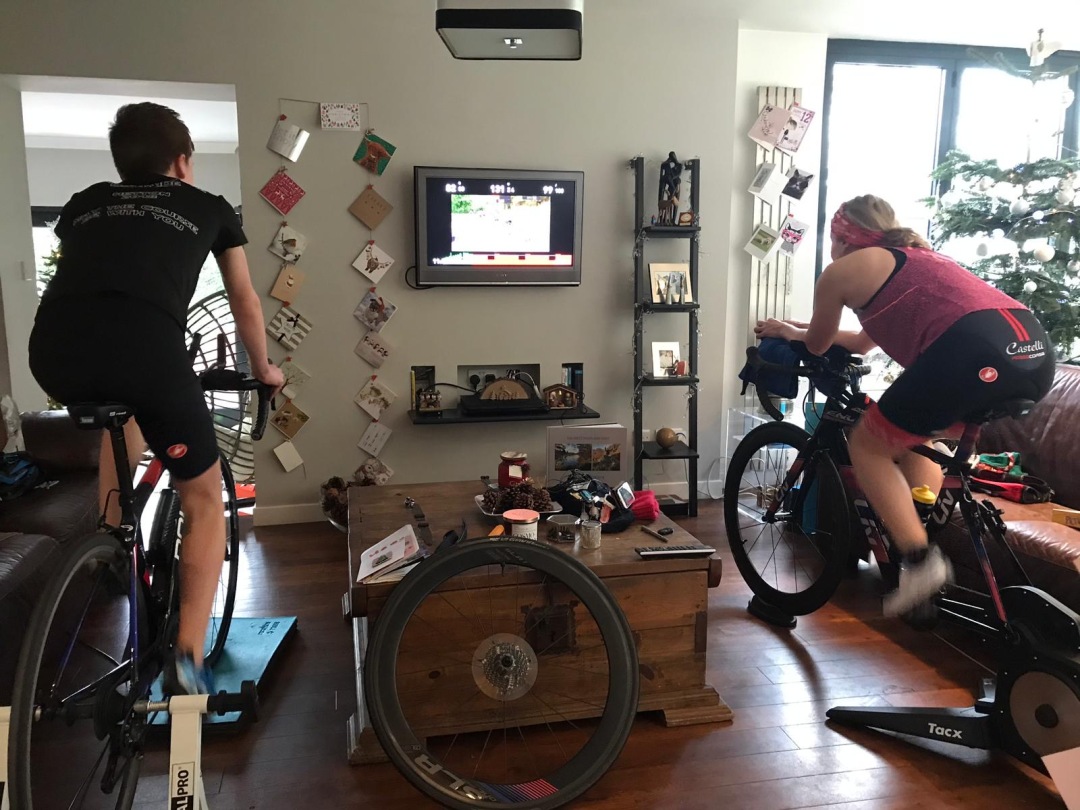 I should say another advantage of these home turbo trainers is that you can use your own bike. Mine is new (probably more of that later) and I’m still getting used to it (especially the seat) and this is a good way to settle in. That said, I’ve not had a bike fit yet, but that’s a chat for another day.

Finally, I would say that there probably isn’t anything that actually compares to getting outside and doing a proper cycle, if you can. And here is us, with some fellow GTC (adult and junior) friends, on the banks of Loch Katrine just after the New Year, which was lovely (if a little hilly). 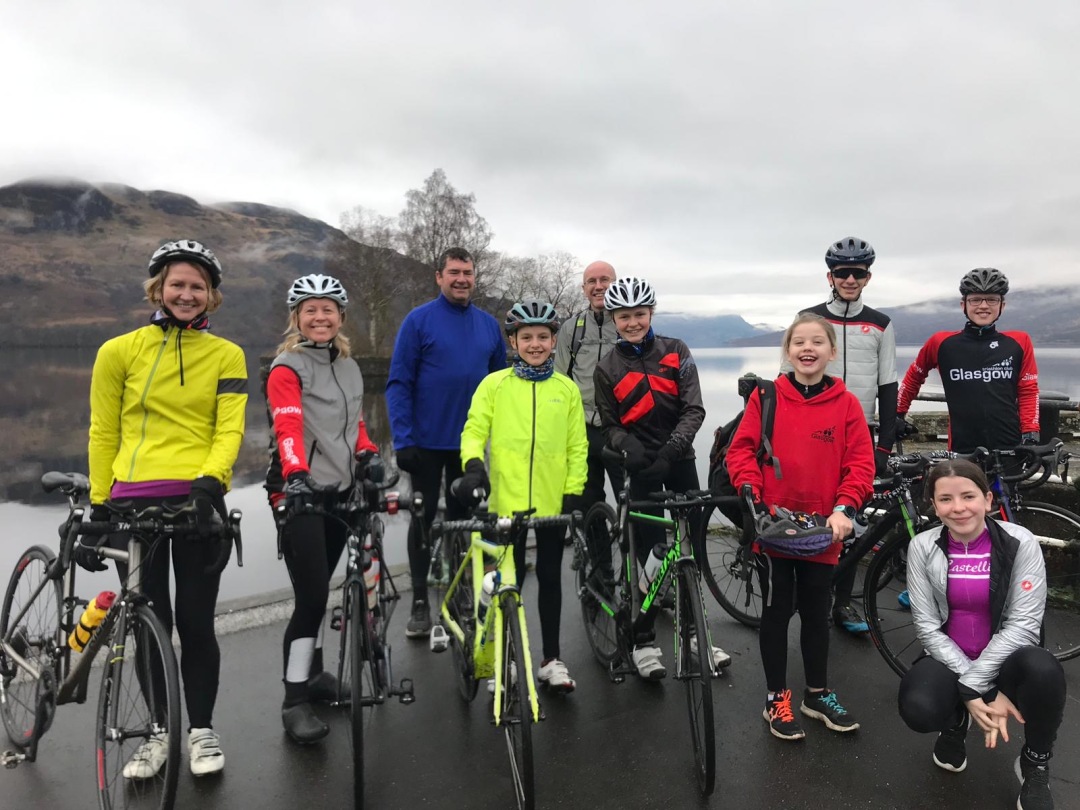 One thought on “Indoor Cycling”