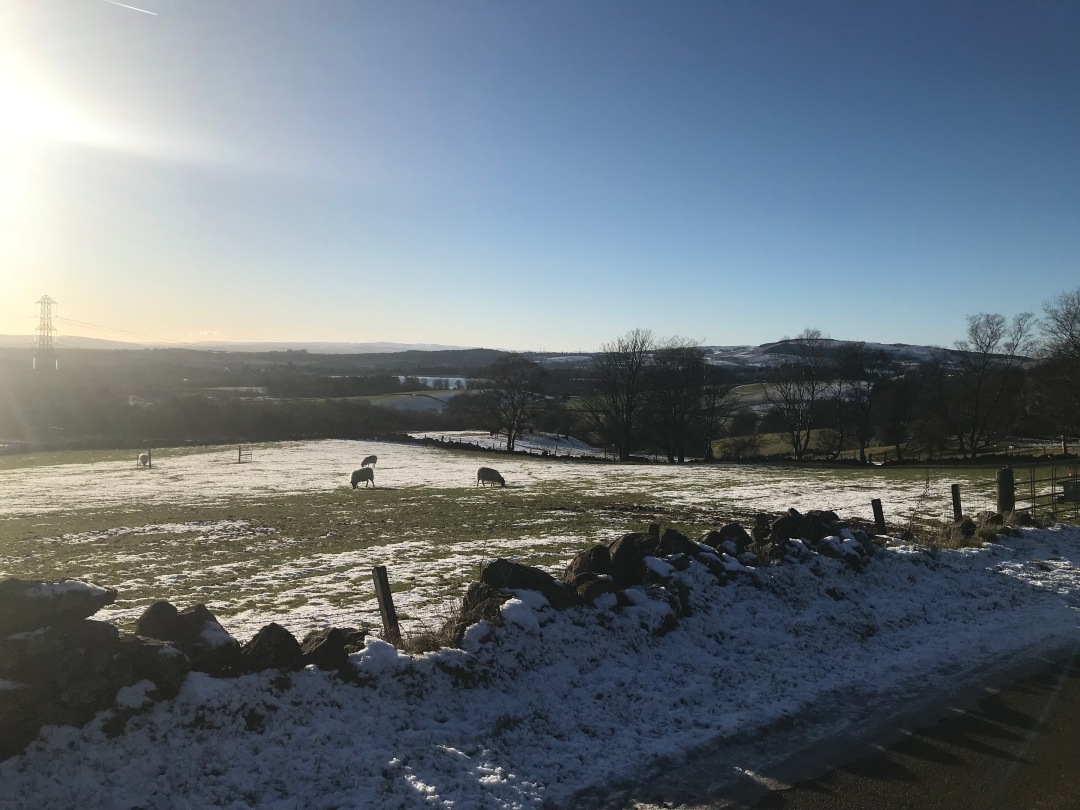 I’ve been desperate to get out on my bike since the bike fit last week, to see how the new position felt. I was due a ride yesterday but couldn’t really plan in advance whether it would be indoor or outdoor as the weather has been rubbish and the forecast wasn’t promising. But we awoke to a glorious, cloudless sky, if somewhat totally freezing. We had our regular Saturday morning yoga session with the lovely Jess, followed by the usual variety of pick ups and drop offs for Jamie and Holly. Paul was meeting a friend for the afternoon, but if Holly was OK being abandoned herself (she was) and Jamie didn’t mind running home from volunteer swim coaching (he didn’t, although he didn’t really have any choice in the matter) then I had a short window of opportunity to get out on the bike for a proper cycle.

I’m still a teensy bit nervous cycling out on the roads myself, but due to the last minute nature of the cycle, I didn’t have a cycling chum to come with me. Realising that increasingly I am going to have to take opportunities when they present themselves, instead of always relying on other people being available to come with me, I decided I would press on myself. My plan was to do a route I’ve cycled a few times before – out from Bearsden, taking the back, hilly route to Torrance, then on to Lennoxtown, Strathblane and home. It’s about 36km in total, predominantly on quiet country roads with very little traffic, lovely scenery and a few testing hills – an ideal training loop that I should be able to do before it got dark.

It started well. There was the initial awkward negotiation through the Bearsden traffic but soon I was out on the back roads, feeling quite pleased with myself. But then I got a wee bit lost. This will come as no great surprise to anyone who knows me. There is a genetic defect that runs in our family which seems to have deleted the sense of direction gene. I took a wrong turn after a triumphant ascent up a nasty hill, thinking to myself ‘hoorah that is the last nasty hill for now’. I then, much to my surprise, found myself on another unforeseen nasty hill (much worse than anticipated nasty hills as at least you are psychologically prepared for these) and did a rather unexpected extra (hilly) loop. The scenery on the cold, crispy, wintery day, was beautiful (see picture), but given the significantly less flow of traffic on this outer loop (and, it seems, extreme altitude) it was covered in sheet ice. There were some clear areas I was able to navigate on my slow but steady way up, but with my brakes on, on the way down, it was frankly hazardous, and after nearly losing it altogether, I admitted defeat and got off the bike and pushed. As I walked rather gingerly down the ice field, I passed a number mountain bikers on their way up – ‘careful,’ I cautioned, ‘it’s a bit icy up there’. They all politely thanked me, while clearly thinking ‘what was that fanny doing up there with slicks and tri-bars’.

Finally I found myself back on familiar territory, and off I set to Torrance. The road from here to Lennoxtown is currently shut to cars at the far end, so the majority of this section was almost car free, and delightful. My new bike set up is indeed much better and I sped along, thoroughly enjoying myself. I even got down onto said tri-bars intermittently although I do find this quite terrifying still, and this remains an area requiring considerable work. Just as I was coming to the descent into Lennoxtown, I reached a portion of road that had seen very little traffic – again this was very icy as a result and I was glad to reach the road block in one piece. I then came off the bike again and pushed it through the blocked section, still covered in a small splattering of ice and snow.

When I reached the main road back to Strathblane at the other side of the block, I was slightly alarmed to discover I couldn’t clip back in to my pedals. It transpired that my cleats had filled with the snow I’d had to walk through and then packed in. I tried dislodging it with a stone but to no avail. In the end I had to sit down, take my gloves off and melt the packed in snow with my fingers to dislodge it. By the time I’d got enough of the ice out to get clipped back in I was freezing and couldn’t really feel my fingers, and was anxious I wasn’t gong to make it home before dark. Fortunately I warmed up enough on the cycle back to Strathblane, although this was also a little fraught as the beautiful sun was very low in the sky and directly in front of me and I wasn’t sure if cars approaching from behind would be able to see me through the glare.

But make it back I did, jolly glad to be unscathed, and very pleased with the bike.