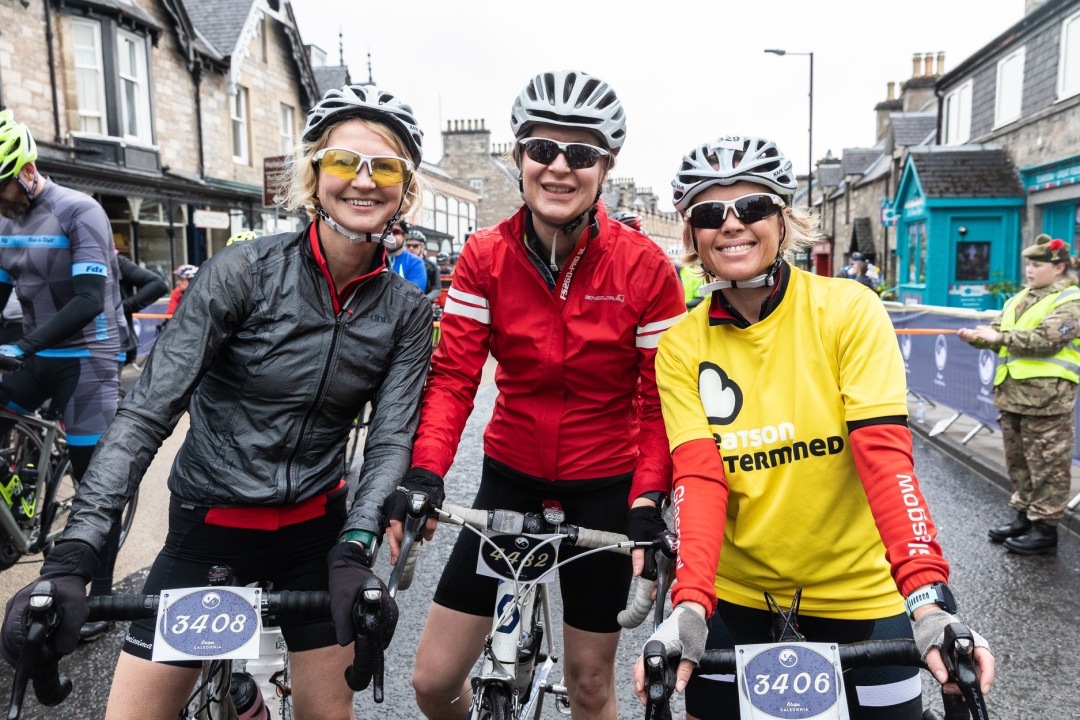 Last week saw the first two of my ‘5 years with you’ challenges for the Beatson Cancer Charity (see ‘All in a good cause‘). I mentioned previously that when I first started working with Crawford and essentially refused to do a half Ironman during my training (not out of petulance, but because I thought – at that time – that it would scare me so much I’d lose any confidence I had), he had suggested that instead I take part in some long distance ‘training’ events. For a variety of reasons, ultimately being that I have no control over when these events take place, I found myself entered into the Etape Caledonia (a hilly 85 mile cycle sportive around Perthshire) on the 19th May, and then the Edinburgh Marathon only a week later on the 26th May. Our anniversary actually.

As my training has progressed and I found myself getting ever closer to May, this suddenly seemed like a terrible idea (in fairness it never felt like a great idea) and I rather wished I’d signed up for a half Ironman instead. It hasn’t been helped by the fact that I have had a niggling calf injury since La Santa (picked up during a rather exuberant Zumba class although I’ve been a bit too scared to admit that to Crawford) which has really curtailed the amount of running I’ve been able to do (certainly much less than we had originally planned).

The weekend of the Etape started as all these weekends do – Paul was on call so away in the hospital and unable to help in any way, Holly due at one end of the city first thing on Saturday while Jamie was supposed to be going to a swim meet at dawn in totally the other direction. I also had an ‘easy’ 18km run and 2.4km swim in my training diary to do, prior to packing up the caravan and setting off with Viv (see Training Buddies) to get to Perthshire in time to register. I moved my swim to the Friday night (surprisingly mobbed – didn’t think anyone else in their right mind would go swimming on a Friday night), enlisted the help of various friends to help with lifts, left Jamie to find a train home himself, had my run and eased the caravan out of its winter hibernation, all just about in enough time to head off. Jamie came too (he was cheering-at-the-finish-line team for Sunday) and for once we had a relatively event-free caravan journey without any drama.

We arrived at the campsite on time, manoeuvred the caravan into its place and made it back into Pitlochry for a speedy registration and trip to the Co-op whilst Jamie was left to do all the caravan set-up faff in the pouring rain. A very pleasant evening was then had with dinner (surprisingly tasty for a vegan meal, kindly provided by Viv – although Jamie and I did add our own cheese – vegan parmesan looks (and I can only presume tastes) like sawdust), a wee beer and the Eurovision song contest. Once again we were surprised by the incredulity of observers that the UK came bottom, whilst we are in the midst of the farce of Brexit, with Boris and Nigel harping on about how awful Europe is every five seconds.

Alarms were set for dawn. Our heat started at 6.50am (!) but we were supposed to get there much earlier (we didn’t). Whilst waiting in our pen, we bumped into fellow club mate Charlotte who was also taking part, and whilst chatting, we were approached by a very eager photographer who asked if he could take our picture – I think he had struggled to find many females, and certainly not a group of them (there is rather a preponderance of lycra-clad males at these events). We agreed and the resultant image is above. Rather hilariously this now seems to have become one of their official photos for the Etape 2020 and keeps popping up on my Facebook page.

And then we were off. I’ve done this race twice before, in 2016 and 2017 and it helps enormously to know what to expect. The first year I took part, I’d not long been on a road bike, wasn’t clipped in and fell off towards the top of Schiehallion due to extreme slowness. My lovely dad rode with me (patiently) and we completed the 81-mile route in 6hrs 19mins. I was thrilled not to have been caught by the sweeper bus, and frankly to make it back alive. In 2017 I rode with my sister Catriona. By this time I’d managed to clip in to my pedals and had spent a winter going to GTC spin classes, and we finished that year in 5hrs 36mins. This year, they had (don’t ask me why) added in an extra mountain to the route – the same height as Schiehallion, but starting at sea level, so actually a bigger climb – which in turn increased the distance from 81 to 85 miles. Despite this, Viv and I managed round in an official time of 5hrs 20mins – and actually my moving time (we stopped at the last food station for a pee and some flapjacks) was 5hrs 6mins so all in all I was thrilled. I suspect it might be the slowest time Viv has ever done but she very patiently waited with me all the way round. This was fine for most of the ride but I suspect particularly trying in the last 10 miles when I really started to flag. But we had a great day, topped off with having Jamie on the finish line to cheer us home, and then a marvellous encounter with John Hannah (yes Hollywood/Scottish John Hannah) who had also taken part. And we even got the caravan home in one piece. 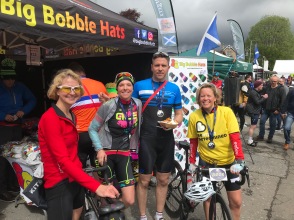 Crawford had promised me an easy week between the Etape and the marathon, so I was looking forward to putting my feet up. I now realise that an easy week when you are training for an Ironman actually consists of 2 strength/core sessions (one of them being a 6.30am circuits class the morning after the Etape), one swim (fortunately the open water session wasn’t on this week), three cycles and two runs. Lol.

On Saturday evening we headed through to my parents’ house as they live in Edinburgh and were looking after us for the marathon. There is nothing like a (very large) bowl of your mum’s homemade spaghetti bolognese to prepare you for a big sporting event. After tea there followed the customary printing of many maps and discussions of where everyone would stand/spectate/get back to the car etc. With a complicated plan in place, we retired to bed and had a surprisingly good sleep (a much more acceptable 10am start for this race). We awoke to the sound of torrential rain. This wasn’t a surprise – much like the last time I ran the Edinburgh Marathon, I had received the weather warning email on Friday night with tales of predicted strong winds and heavy rain. After the largest bowl of porridge I think anyone has ever consumed, and the usual running around trying to find safety pins, mum and I left as she was dropping me at the start. This went absolutely according to plan and I had plenty time to find my wave and indeed the toilets.

The heavens opened as promised so I was thankful for my bin bag I was wearing, although it made it slightly tricky for dad to find me after cycling in to see me off. But find me he did, and gave me some lovely good luck wishes before heading off the start line (a good 15 minutes away) to watch me commence the race. Having put down what I thought was a wholly unobtainable race time of 4hrs 30mins (last time it took me 5hrs 3mins), I still found myself in the second last wave, with only the giant elephants and old age pensioners behind me. (I was beaten by the giant elephant as it happened. And probably in fact most of the old age pensioners too). There was a very dramatic countdown to the start of the race, followed by a rather anti-climactic 15 minute slow shuffle to the start line by which point I had discarded my bin bag and was actually a bit freezing.

But then finally we were off! And how lovely to have Michelle (see Training Buddies) with her sister Mel cheering me on one side (one of their other sisters – there are about 10 of them – was also competing) and dad cheering on the other. And the first part of the run was great. I felt strong and ran consistently and well – indeed I did my fastest ever half marathon (2hrs 6mins) in the first part. I was helped enormously by dad, who popped up every mile or two (he essentially cycled the entire marathon, plus the same again getting to and from home. And actually an extra bit when he left his rucksack at one stopping point and had to cycle a few miles back to retrieve it) to give me a much needed high five or kiss. My friend Jeff from work was there at 11 miles which was just lovely, but sadly mum and the kids didn’t manage to their designated cheering point on time to see me after fighting all the way there with the traffic and indeed very unhelpful satnav which took them on a merry detour.

At 25km I started to struggle a bit and the next 10km were extremely tough. I slowed right down and had to have a couple of walks. Edinburgh Marathon is an out and back route, and the very apex is quite difficult to get to so there are very few spectators to cheer you on (it makes such a difference). Also, exactly like the last time, when you turn round to head back to the finish (this is at about 18-19 miles), you are hit by the headwind, which once again, seemed to be gale force. I didn’t think I’d make it back, but then up popped dad again (huge cuddle this time rather than a brisk high five) and so did Jeff, at mile 24. The end was then nearly in sight and I was spurred on by the fact there wasn’t much further to go. The crowds then keep you going – amazing support from them, and if anyone reading this is planning to take part in a race for the first time my top tip would be to put your name (in big letters) on the front of your T-shirt. Shouts of ‘keep going Hilary!’ really get you to the end. The last mile felt like a marathon in itself but finally I was on the home straight with mum, Paul and the kids cheering me in (having missed me on the way out they had guarded their spot at the finish for hours). And in a time of 4hrs 33mins – a full half hour quicker than the last time. I am thrilled. And hugely grateful for the support – I cannot express enough how important it is.

And – I had the whole day off afterwards to lie on the couch watching telly and eating trifle. Hoorah. 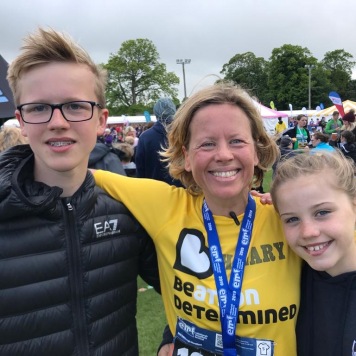 If anyone is inclined to make a wee donation to my fundraising page, you can find the link here. Thank you!