Where is the time going?

Eek. It is the middle of July and today is 8 weeks to Ironman Wales. I’m not sure how this could possibly have happened, but at the same time, it feels like we have been training for a decade. I also can’t quite believe the length of time it’s been since I posted my last blog. Much to discuss.

My last post was at the end of May, when I had just finished the Etape and then the Edinburgh Marathon within a week of each other. Actually I had a big boost after that, not only because I’d managed them, and in quick succession, but the improvements I saw, compared to when I’d completed them before. What was also interesting (and reassuring) was how much quicker the recovery was this time round. I seem to remember being essentially immobile for days after the marathon the first time, but this year I was back training within 48 hours (albeit somewhat slowly).

At the end of that first week post-marathon, the club were running the first of their summer season open-water Aquathlons – this one was a short super sprint event – 400m swim at Pinkston followed by a 2.5km run. I thought I could just about mange these distances and headed there straight from my Ayr all day clinic on the Friday. And in fact it was great fun. The heavens had opened and I think we were wetter during the run session that the swim but how lovely to do a wee short event after the long distance races of the preceding weeks. And I mention it for two reasons – one, because during it I ran my first ever sub-five minute km (I feat I thought I would never achieve) and two, because for the first (and I’m sure last) time I beat Paul. Now I’m not gloating – it’s only because the distances were so short, and Paul absolutely hates open water swimming in the cold, so by the time he’d got used to the temperature and started to swim, the rest of us were just about finished, and then the run was so short (and because I ran quicker than ever before) he didn’t have time to make up lost ground. Nonetheless I was thrilled.

The following weekend I surprisingly found myself taking part in a standard distance open water triathlon. As I mentioned in my ‘All in a good cause‘ blog, I am raising money for the Beatson Cancer Charity during my run up to the Ironman. This involves taking part in five sporting events, to mark five years the Charity has been in existence. Very unfortunately, the Happy Valley Triathlon that we were planning to take part in whilst on holiday in America in June, was cancelled unexpectedly. This was very disappointing not only because we were looking forward to it very much and had planned our entire summer holiday timings around it, but also because it left me short on events for the charity. So I had a last minute sign up for the Lochore Standard Triathlon – we love this event, where there are youth and adult races all taking part at a great location in Fife, but I have only ever competed in the sprint distance race in the past. Indeed I wasn’t planning on doing a standard until the end of July. But sometimes these things are better when you have little warning, and don’t have time to get anxious about them.

I headed off at dawn with the mums (Lara and Dianne who were racing too) and Jamie came later with the Donaldsons and other youths competing later in the day. Holly didn’t come as she had daily rehearsals for her end of year show with theatre school (Bugsy Malone – it was ace) and Paul stayed behind with her. In fact he couldn’t have raced anyway as the week before he completed his training half-Ironman, during which he had a nasty fall off his bike in tricky conditions and injured essentially every part of his body, including his wrist, which he actually thought he’d broken (he hadn’t but is only just recovered from this now). I’ve mentioned before that prior to this, I had only ever completed one standard distance triathlon at St Mary’s Loch last summer – it was awful and I swore I’d never do another. Hmmm. That one took me 3hrs 27mins (very slow) and I was hoping to improve on that. And I very much did, finishing in a time of 3hrs and 13 seconds. Delighted. The swim was actually a bit slower but my cycle was 20 mins faster and run 10 mins faster. I’ve said it before and I’ll say it again. There’s a lot to be said for this training malarkey.

And then before we knew it we were heading off on our summer holidays. I have family in America and we had planned this holiday way before signing up for IMW. We were therefore a bit anxious about how we were going to fit all the required training in, whilst being out of the country and with only a limited amount of kit. To cut a long story short, we managed to a degree. Our first week was spent with the family (there were 14 of us) in a big house by the beach on the South New Jersey coast. It was lovely, and so great to see our American cousins, but my goodness me it was HOT! Fortunately we remained jet-lagged for a few days which made getting up early for runs a bit easier – it would have been impossible later in the day due to the heat. The longest run I managed was about 18km and I think I lost half my body weight in sweat, even at dawn. We also managed some evening strength and core sessions in the shade but really not cycling or swimming (although there was much frolicking in the waves at the beach).

The second week saw us head back inland to State College, Pennsylvania, where our family live. My marvellous cousin Kirsten had managed to source some good road bikes from lovely friends for me, Paul and Jamie, and we got some great cycles in around rural Pennsylvania with my Aunt and her cycling buddies. One in particular was fantastically hilly and nearly finished me off, but I was saved by the most enormous ice cream cone I have ever encountered (Americans don’t do anything by half). We also managed some swimming – both pool and open water – and it was great to do this with Kirsten who was a top level swimmer during her school/college days and she gave us some very handy coaching while we were at it. And after our disappointment of missing out on our planned triathlon, we did manage to find a race to take part in while we were there – the State College annual 4th of July fun run. The kids did the 4km race and Paul and I took part in the 4 mile race. We were sorry to leave after a great time, but how lovely it was to get back to running in the cool drizzle! 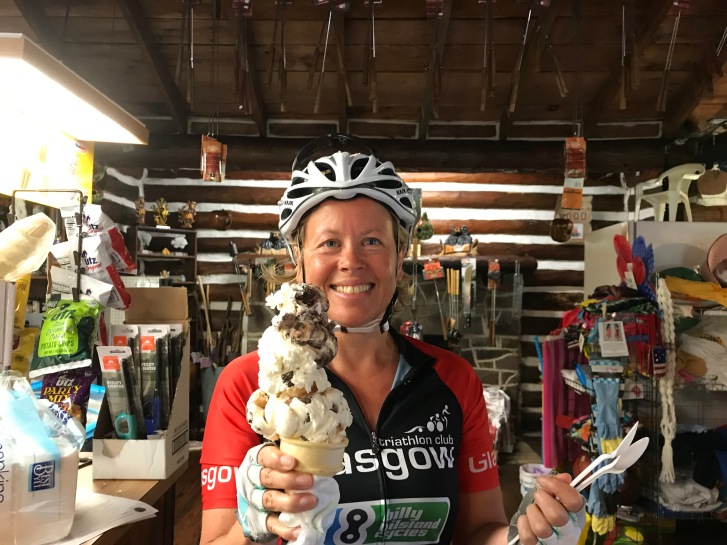 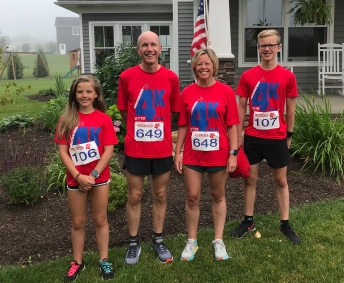 And now that we’re back from the USA I can be officially anxious. This whole past year I’ve been thinking ‘I won’t be worried until we’re back from America, because then it will be really close’. And now it’s really close. We have thrown ourselves back into training with renewed gusto, and frankly I’m not sure we’d survive much longer that another 8 weeks (if we manage that at all).  Our first week back was a jet-lagged haze of trying to get back into work mode. The first weekend we had a race at Monikie Park near Dundee. This was a super-sprint team relay event where you are in teams of 4, and you each do a short mini-triathlon, before handing over to the next team mate. Paul and I were in a team with Gareth and Viv, and altogether there were 12 teams from Glasgow Triathlon Club. This is quite a competitive event as it is a European Race Qualifier and rather pleasingly, our team was 14th out of 40 teams in total – and 4th in the club team standing. Not bad for the oldies! When I went to collect our official time I was slightly put out when the print out rather rudely stated ‘slower than the kids’ with our times (it was the youth races earlier in the day, and Jamie and Holly were supposed to be taking part, but terrible mother that I am, I had forgotten to enter them). I then learned that that was actually our team name that Viv had entered us as. Lol.

We got back to Glasgow pretty late (we’d stayed in the caravan the night before so had to pack it up and get it home) and I still had a 10km run to do, followed by a 120km cycle with Viv the next day – legs were a bit tired and it was a very hilly route, but lovely to be back out cycling with Viv (we were also lucky with the weather) and good to get another long one under our belts.

This week the weather has turned – I had one of my most miserable cycles ever on Wednesday in torrential rain and strong winds, when I could barely see where I was going and really questioned my motives for all of this. I got home and had a 15 minute turnaround before heading back out for a swim-run (again in the pouring rain) in Loch Lomond. Although I enjoyed this very much more than anticipated. And so it continues. Yesterday was an hour of yoga then a long cycle with Jamie, and I’m just back from this morning’s long run – again lovely Jeff came with me, and in fact during it, I ran my fastest ever half marathon (2hrs 3mins 48 secs). I’m putting off the swim I need to do (2.6km) which I’d already put off from Friday night after getting home late from an awful clinic, but when I finish this I’ll head out.

Whilst we continue to see the progress we are making, and honestly I would say I am enjoying the majority of what we are doing in training, Ironman Training Fatigue is definitely setting in. I think it can be summed up by the conversation I had this morning with Paul before we headed off on our runs. Me: I’m making some porridge – do you fancy some? Paul: I’m having a fry up. F**k this porridge s**t.

We could both do with a day on our arses with a proper drink.

4 thoughts on “Where is the time going?”